Timber through and through

The Scandinavians have shown their pioneering strength once again, this time in the design for a new cultural centre. The Sara Kulturhus in Sweden’s Skellefteå is among the world’s tallest high-rise structures built entirely from wood.

Sweden has a long tradition of building with timber. However, until 1994 a height restriction meant that just two storeys were allowed to be constructed. This was a precaution that originally resulted from numerous fires in the cities long ago. But in the meantime, the maximum height limit has been dropped, and Sweden has achieved a special status when it comes to timber construction. “If you can manage to design a timber building that’s tall and stands, then you can build it,” says young architect Oskar Norelius. He worked alongside colleague Robert Schmitz at White Arkitekter to develop the winning design “Sida vid sida” (“Side-by-side”) for the Sara Kulturhus in Skellefteå.

This city in the north of Sweden, just beneath the Arctic Circle, has essentially been given a new cultural one-stop shop. Theatres, a museum, art gallery, conference centre and the city library, plus a new hotel, are intended to serve as people magnets.

A plyscraper without a concrete core

The doors to the cultural centre opened in 2021. Standing 80 metres tall with 20 storeys, it is the world’s second highest building made entirely of wood. The highest is Mjøstårnet in Norway’s Brumunddal. While most such buildings are built in timber hybrid design, the Scandinavian structures are without a concrete core as reinforcement. Indeed, this pioneering construction in northern Sweden even includes CLT elevator shafts.

When we’re talking timber in tall buildings and in larger buildings, the raw material is engineered wood.

Surroundings forests supplied all the wood for the new cultural centre in a bid to remain local. And the framework was constructed only 60 km away in Bygdsiljum. Similarly, the general contractor had the 205 modules for the hotel rooms prefabricated in Renholmen, just a few minutes’ drive from the building site. The architects emphasize that this project was only possible due to close cooperation between the various craftspeople, plus the expertise of local timber experts and the latest findings in engineered wood technology.

The main challenge for the architects was getting people to accept the risk of building something that had not been built before. Norelius says that people doubt timber as a construction material. Everyone has a connection with wood and is familiar with it from smaller buildings, such as cabins. “They ask themselves: Will it even stand? And what about fire and water?”

But there is a big difference between the wood used for cabins, and a high-rise like this one. “When we’re talking timber in tall buildings and in larger buildings, the raw material is the same, but this is engineered wood,” Norelius explains in the project video. He is referring to CLT (cross-laminated timber) and glulam (glued laminated timber), which are the timber construction elements used in such high-rise buildings.

You will feel that you’re in a high-rise, but somehow you will also be in a wood cabin.

In a fire, the surface of the wood is charred and thus protects the inner layers from the heat. Incidentally, this effect has been used in Japan for centuries as the wood sealing technique shou sugi ban.

Responsibility for the climate

The design submitted by White Arkitekter received the MIPIM Future Project Award in 2018. The international architectural firm focuses on building with timber as a renewable material, and also on ecologically sustainable architecture. Their zero-energy hotel recently opened outside Stockholm, as the first of its kind in Scandinavia. “As architects, we have a responsibility to take action against climate change,” their mission statement reads.

The Sara Kulturhus is now open to the public. “When I’m standing on the 20th floor of the building, I expect to be surprised because you’ll have a view over the entire landscape around Skellefteå,” Norelius envisioned during construction. “You will feel that you’re in a high-rise, but you will also be in a wood cabin somehow.” 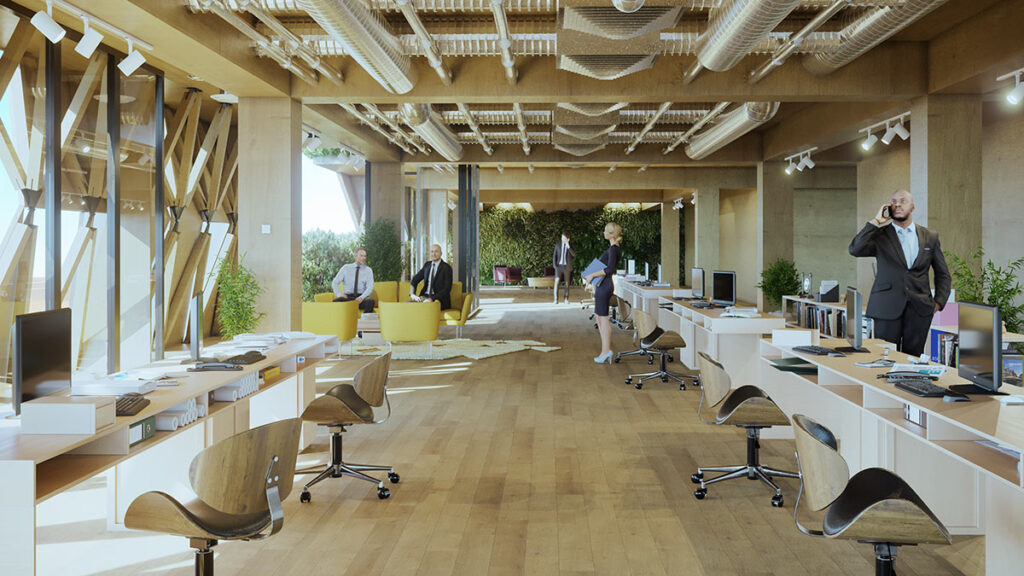 The design for the urban office building Saint Denis in Paris shows the potential of parametric design in timber construction. Architect Arthur Mamou-Mani is a luminary in this new discipline, and we were able to meet him online.

Self-sufficiency is no longer a dream reserved for downshifters. The modular building system named The Farmhouse designed by Studio Precht allows residents to grow food in big cities.

Homerton College at the University of Cambridge has chosen the design by Alison Brooks Architects for a pavilion that combines modern timber construction with high-tech facilities. It is expected to be a future-facing answer to their needs.

The Swedish university city of Växjö has been named “the Greenest City in Europe”. Half of all its new buildings have been built with timber. But the city plans to go even further.

When it comes to timber construction engineering, the United States has been lagging behind other countries. Ascent Tower in Milwaukee aims to change this. Topping out as the world’s tallest timber tower at a height of 284 feet, the building uses expertise and structural elements from Austria.

#interior
Shopping inside a timber canyon

As many as 40,000 pieces of wood had to be fitted together for the gift shop in the National Museum of Qatar. The inspiration behind this award-winning interior design was supplied by a miracle of nature in Qatar’s desert.

#greenbuilding
The tallest passive house in the world

Canada’s Earth Tower aims to outshine all existing timber high-rise buildings. Its energy concept means that this 40-storey skyscraper in Vancouver will be the world’s tallest passive house.

On the edge of the tropical rainforest in Mexico, a research museum will explore how nature and progress can be reconciled. Known as Xinatli, its sophisticated design takes a fresh look at circular building materials.

#living
Back to the roots

The eco-friendly residential project Roots will be the new landmark of Hamburg’s HafenCity and the tallest timber high-rise in Germany. Architect Jan Störmer reveals what its future residents will have in common.

#greenbuilding
Timber with talent and technology

#city planning
Back to the future

Oslo was once built entirely of wood. The project chosen to redesign the area around its railway station heralds the return of this traditional building material to the Scandinavian metropolis. A spectacular office tower with an innovative hub is being developed, named Fjordporten.

#greenbuilding
Forest bathing on your doorstep

Dutch architectural firm Gaaga has designed a residential building in Eindhoven that is distinctly people- and environment-friendly. Surrounded by trees, it is situated in the middle of a park.

A design hotel on a bunker

The redevelopment of an above-ground Nazi-era bunker is Hamburg’s largest building project since the Elbe Philharmonic Concert Hall. With spectacular rooftop gardens and nhow Hamburg design hotel, this new landmark in the heart of the St. Pauli district is sure to become a magnet for visitors.

Japanese architect Kengo Kuma and Australian artist Geoff Nees teamed up to design the Botanical Pavilion – a wooden pavilion that is constructed like a 3D puzzle – without using any kind of glue or screws.

#greenbuilding
The house made by 3D printers

The round construction known as TECLA has created quite a stir. Having teamed up as 3D printing pioneers, WASP and Mario Cucinella Architects have produced the first CO₂-free housing prototype printed entirely from raw earth.

Japanese architectural firm UENOA has created a wooden office that has no need for bearing walls. Folded origami-style, the ceiling construction gives a whole new lightness to cross-laminated timber.

Sustainability is a top priority for the Powerhouse Company. In an interview, partner Stefan Prins explains why this means more than just a careful choice of materials and energy efficiency, and how essential it is to consider all the changes brought about by climate change when building.

The Life Cycle Tower One was the first timber high-rise in Austria and the prototype for a new type of serial construction. CREE founder Hubert Rhomberg explains the green building concept and why we have to learn to think in lifecycles.

Researchers at Cambridge University are helping to turn London’s spectacular vision of a wooden skyscraper into reality. The Oakwood Timber Tower is to rise 300 metres into the sky, almost level with the tallest building in the city.

Most people looking for a new home with a sustainable design need to have deep pockets. Rotterdam’s Pendrecht district aims to buck this trend courtesy of timber building Valckensteyn, the brainchild of the architects at Powerhouse Company.

#greenbuilding
All in the name

In Düsseldorf, The Cradle is gradually taking shape. The timber hybrid office building is being constructed according to circular economy principles, and these will also govern its future use.

#greenbuilding
Twin peaks for the Netherlands

The Dutch city of Eindhoven will soon be home to the world’s highest “plyscraper”. The two towers – 100 and 130 metres high and known as the Dutch Mountains – are to set new standards in high-rise timber construction.

An entire residential complex in Berlin-Kreuzberg is to be built out of timber – vertically. With a planned height of almost 100 metres, WoHo is set to be Germany’s tallest timber building.

A mixed-use project in Sweden’s Gothenburg is being crowned by star architect Dorte Mandrup. The jewel in this crown is its use of timber. The new eco construction is intended to become an icon in sustainable urban architecture.

Designed by US architect David Rockwell, built according to WELL Building Standard principles. The Sage Collection by British furniture maker Benchmark is good for humans and the environment.

#city planning
A district made of wood

Munich’s Prinz-Eugen-Park is the site of the largest integrated timber settlement in Germany. And that’s not all – the city planners have even more in the pipeline.

Charred is the new black. An ancient Japanese technique for conserving wood is all the rage in contemporary architecture. As well as looking sophisticated, this building material scores top marks when it comes to sustainability.